Certain universals are feared by almost everyone. Such as death.

If a character in a story has loved ones, losing them is an even stronger fear.

A story engages the audience or readers more strongly when there is something valuable at stake for the character, such as his or her own life or that of a loved one. So giving a character a universal fear is usually a good place to start. 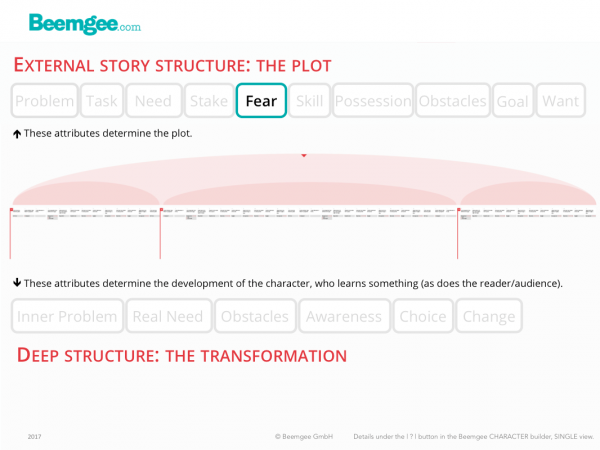 Giving a character a specific fear to overcome requires this information to be placed early in the narrative. The fear is then faced at a crisis point in the story, usually the midpoint or the climax.

Characters can have specific fears. A fear which is specific to one character must be set up early in the story, so that the audience or reader is aware of it. When the moment comes that the character must face their fear, the audience remembers that they already knew about this fear. If the author has not dropped this bit of knowledge prior to the point when it becomes relevant, the audience will not react as intensely. This is an example of a storytelling technique known as set-up/pay-off. The surface structure of a good story will be full of set-ups that are paid off later in the narrative. Sometimes the technique is called foreshadowing.

A specific fear can be concrete. Indiana Jones hates snakes, as we learn in the opening of the movie Raiders of the Lost Ark. Of course he has to enter a snake pit later. Winston Smith is mortally afraid of rats, the narrator tells us early in 1984. Of course the Party knows this and ends up using this knowledge to torture Winston most effectively.

Note that the snakes provide a dramatic scene, but not Indy’s biggest crisis. For Winston, the fear of rats is so great that it provides the climax of the story.

A character’s specific fear can also be the loss of a quality they hold dear, such as their reputation or their honour. Such a fear can be a powerful motivator to action, and can produce moments of dramatic power when the quality is endangered or the fear has to be faced.

The fear may be an expression of the internal problem. As such, the character may not even be aware of his or her fear. It is nonetheless important that the audience or readers become aware of it. For instance, it may be a fair to say that the title character of Tootsie fears genuine emotional relationships with women, or in short, fears women. By “becoming” one himself, he deals with and overcomes his fear.