Nonetheless, for an author, it may be advisable to create a marked threshold where the protagonist enters into the alien territory of the middle bit. The exploration and transversal of this territory is what on a plot level the middle bit is about, and it takes up the greater part of the story journey.  END_OF_DOCUMENT_TOKEN_TO_BE_REPLACED

Stefan’s favorite genre is visionary fiction – stories that have an enlightenment dimension. Enlightenment and storytelling have interesting parallels, which prompted Stefan to write a book about storytelling – The Eight Crafts of Writing.

Get a glimpse of his approach to story craft in his article.

Storytelling is both art and craft, authoring and writing, plotting and pantsing.

Art is creativity. Creativity requires receptivity to the Muse and its inspirations.

Inspirations arrive as thought-images, which writers put into words. How to turn thought-images into words and assemble those into a structured story with vivid characters and an engrossing world is a matter of craft and skill.

The literal meaning of Kung Fu is a discipline achieved through hard work and persistent practice. Writing is Kung Fu.

But no limitations, no story. No canvas, no painting. No net, no tennis.

Understanding the difference between freedom and dominion helps to appreciate the constraints of craft. Freedom is a means to an end. We want to be free to do something, for example, to write a book. That’s all there is to freedom. Dominion, on the other hand, is mastery of structure.  END_OF_DOCUMENT_TOKEN_TO_BE_REPLACED

Universal storytelling principles behind the most successful movie series ever.

Most writers don’t have access to such a talent pool, nor do most authors write action-packed spy capers. Also, 007 stories in particular seem so specific a category that authors might not consider that their own works have much in common with them. So one might be tempted to think that most writers can’t learn anything useful from James Bond.

Many people say there is a James Bond formula. Guy Hamilton, director of four of the early Bond movies, has said not. But there are certainly recurring scene types and structural elements that bear examination. A closer look reveals at least seven dramaturgical principles that any author could consider applying.

END_OF_DOCUMENT_TOKEN_TO_BE_REPLACED

Think you know world literature? How many of these classics have you read?

You have likely heard of The Divine Comedy, of Don Quixote, of Shakespeare – but have you heard of the Three Kingdoms? Of Sun Wukong? Of Cao Xueqin?

We asked ourselves, how are stories that had no contact with the western way of composing narratives different? Are the principles of storytelling really universal across cultures? Our idea was to find out by taking a look at classical Chinese literature. We discovered a number of interesting aspects to the Chinese way of telling stories, and have summarised them here.

In this post, we’ll tell you about the novels we read. Each was a revelation in its own way. The long-form novel came along quite suddenly in China just over 500 years ago. Generally recognised as the first great Chinese novel is Three Kingdoms, which appeared around 1494 CE. The most modern of the novels we’re considering here was published around 1760. That means we’re looking at Ming and Qing dynasty literature.

So which classical Chinese novels should you read? Here’s our list of favourites.

END_OF_DOCUMENT_TOKEN_TO_BE_REPLACED

In either case, the opposition may be …  END_OF_DOCUMENT_TOKEN_TO_BE_REPLACED

Often there is a central plot and at least one subplot. The central plot is usually the one that arcs across the entire narrative, from the onset of the external problem (the “inciting incident” for one character) to its resolution. This is the plot that is at the END_OF_DOCUMENT_TOKEN_TO_BE_REPLACED

In stories, characters solve problems. This is the basic principle of story.

Problems come in all shapes and sizes. What’s more, in storytelling they come from within and without. The problems that come from within are hidden, internal, and it is quite possible for a character not to be aware of them. They are typically character flaws or shortcomings.

But they are not usually what gets the story going. Most stories begin with the protagonist being confronted with an external problem. 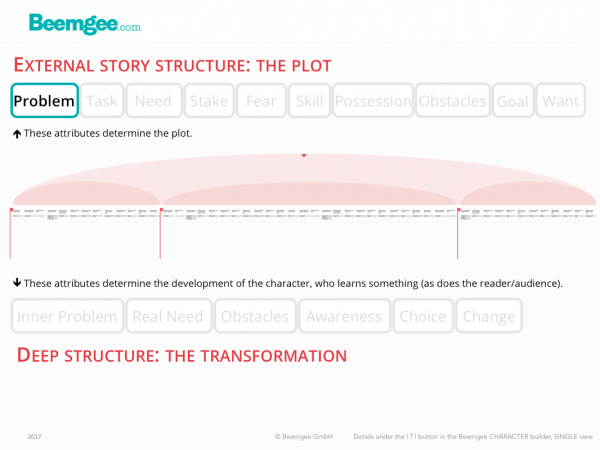 The external problem of the main character triggers the plot. It is shown to the audience as the incident which eventually incites the protagonist to action.

In some genres this is easy to see. In crime or mystery fiction, the external problem is almost by definition the crime or mystery that the protagonist has to deal with. END_OF_DOCUMENT_TOKEN_TO_BE_REPLACED