Working as a Writer

Long or short form, commercial or artistic: stories need to be developed before they are told.

The fewest of people with the inclination to write stories actually make a living off it. There are more unsuccessful authors and screenwriters than successful ones, if we measure success in terms of monetary remuneration. And there are yet more people who would love to write that book but never seem to get around to it. 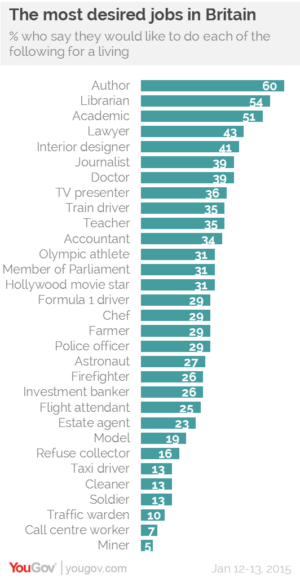 In fact, according to a 2015 YouGov poll in the UK, being an author is the most desirable job in that country. 60% of Britons want to write for a living! In the land of the Bard, J.K. Rowling, and Richard & Judy, perhaps that is not so surprising. Yet we may assume that in other countries too, the desire to tell stories is quite prevalent.

Practice makes perfect, so they say. The best way for a writer to improve their writing is to write. You may have heard of the theory that to be really, really good at something, you need to have done 10,000 hours of it.

But who has 10,000 hours to spare before producing anything readable?

We would contend that any writing is practice. The artist in the garret must eat and so a suitable option would be earning from writing. This is, after all, an age in which content is regent. Perhaps it is even true that more stories are being told today than ever before. There is an abundance of media and channels, and all must be filled with material. Hundreds of original series are being produced for the streaming services, cinema is not dead after all, and neither is TV, publishers are still publishing novels while self-publishers do it too.

Advertising is another field in which storytellers can hone their craft. Every company needs its image video, every product its presentation. Even towns, nonprofits, and unions tell stories.

So much content is required that not all of it is conceived or produced by full-time professionals, let alone employees of studios or agencies. The job of the storyteller is one well suited to part-time, freelance, and home-office.

So if you are working towards finishing (or even starting) that novel or screenplay, don’t think that if you wrote some copy or script to pay the bills you were wasting your creative energy or artistic talent. You would be practicing. And getting paid for it.

And as ever, the craft entails not just the writing of text. For the text to serve its purpose, for it to mean something, for it to work, it must exhibit some sort of inner coherence. To achieve resonance with the intended audience, some form of story must be told, replete with a hero (be this a product), a revelation (or ‘call to action’), an arc leading from the headline or first frame to the punchline or packshot. All this implies structure.

Furthermore, this sort of writing work is less likely to be lonely in the garret and more likely to require frequent consultation with the team, the agency, the press department, or whomever you’re working for. The job is likely to be more collaborative. Which means that you may be communicating about your story before you’ve written it, trying to convey what you intend to achieve to people who as yet don’t see your vision.

Alternatively, the people giving you the job may brief you precisely, telling you attributes of character they want to see in the hero you must flesh out or insisting on necessary plot points in the narration they want you to finish.

An outline may be presented to you as part of a brief, or you may present an outline before writing.

As a story development tool, Beemgee was conceived for long-form fiction. And so it is used by novelists, screenwriters, games developers, dramatists all over the world. In rare cases we actually find out about completed works which were conceived with Beemgee (while being typed in Word or Final Draft).

However, we also happen to know of some short-form stories developed with Beemgee. Here are a few of them:

For the German trade union Verdi, a short film about forming a works council –

For a Swiss fintech startup, a film explaining their investment platform –

While it may not seem like it, if you get to work on pretty much any kind of content, you are working your way towards being a better writer. Every story you tell makes you a more experienced storyteller.

There are jobs out there for storytellers. Especially now. Finding them may be easier than you thought, since you don’t necessarily have to make a career of it. Even if the first jobs you do are, say, for local projects and little pay, many advertising or PR agencies could be willing to give you a try. Ask around, or check the phone book. Or check out the job platforms, such as Jooble.

Should you work freelance, remote, or part-time on copy or content, you can count every minute of it towards achieving those 10,000 hours. And you don’t need to set a stop watch to add up the minutes (only, perhaps, in order to write your invoice). You will feel yourself growing more confident with every bit of your fluff that is published, every video on YouTube that you wrote.

Develop a story. Any story: