An internal problem makes the character appear fallible – and thus more credible, more human, more like us. Internal problems are invariably emotional and private. They express the inner life of a character, and often reflect our own inner feelings. They are therefore usually far closer to the reality experienced by the recipient of the story, the audience or reader, than the surface structure of the story, which is based on the external problems of the characters. Everybody knows feelings like doubt, fear, pride, desire, anger, etc. We can relate to emotions like that more intensely than we can relate to, say, the work of an FBI agent, the adventures of an archaeologist, even the ordinary life of an Irishman on a June day in 1904. Or rather, we are interested in the work of the FBI agent, the adventures of the archaeologist, the ordinary life of the Irishman because they have emotions that we know.

So fairly early on in the story, while the audience or reader is being introduced to the characters, the story may also provide clues about the main character’s internal problem. The character then sets forth on the story journey, hoping to achieve the want and the goal, which the story has also established quite early on.

At first, small hindrances turn up that need to be overcome or circumnavigated in order to continue. They may appear as tests. 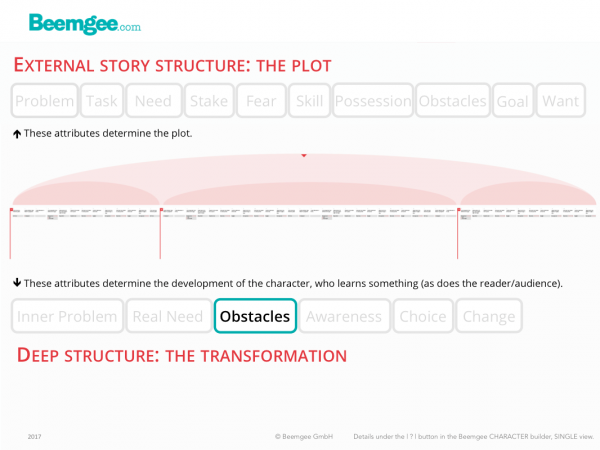 Internal obstacles arise as manifestations of the character’s inner problem. They are instances that occur only because of particular character traits the character really needs to address.

At the goal, which is the gateway to the want, the character then faces the final battle with the most massive form of the internal obstacle.

By this time, the story may have woven the various sorts of obstacles together, so that the climax is about the character overcoming them all at the same time.

Now, what we’ve described here is an archetypal way stories are structured. It sounds a little simplistic when put in abstract terms like this. But look at your favourite stories, whatever they are – however literary and high-brow or popular and entertaining they may be – and you will probably find that the basic gist of the story can be described in such abstract terms. If you want to tell a story, and you are in the process of composition, it might help to set some internal obstacles for your character to overcome.