An inner or internal problem is the chance for change.

In storytelling, the internal problem is a character’s weakness, flaw, lack, shortcoming, failure, dysfunction, error, miscalculation, or mistake. It is often manifested to the audience through a negative character trait. Classically, this flaw may be one of excess, such as too much pride. Almost always, the internal problem involves egoism. By overcoming it, the character will be wiser at the end of the story than at the beginning. Thus the character must learn cooperative behaviour in order to be a mature, socially functioning person. 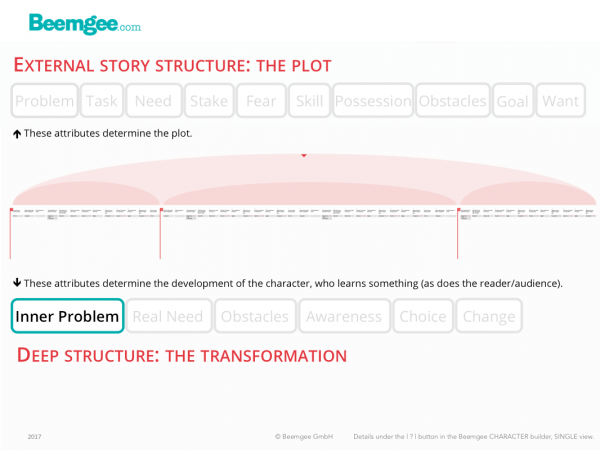 The inner problem is the pre-condition for the character’s transformation. It is the flaw, weakness, mistake, error, or deficit that needs to be fixed. In other words, it shows what the character needs to learn.

From Lack of Awareness to Revelation

The Internal Problem of a character is revealed to the audience in scenes that show the symptoms of the flaw for the character and her environment. It results in internal obstacles, specific instances of the character’s flaw which prevent her from progressing directly towards her goal. Furthermore, the antagonism in the story may well be a sort of symbolic manifestation of the protagonist’s internal problem.

So a character may initially not be aware of his or her internal problem. A character trait, after all, is something that has been in a character for a long time – since before the beginning of the story. In real life, the origin of behaviour patterns is seldom so singular and specific, but for authors of stories it helps to have scenes in mind for:

The scenes don’t necessarily appear to the audience in that order. Since the inner problem was caused long before the story starts, all this seems to invite backstory scenes to explain its origin. But beware, there is a subtle writer trap here. More about that below.

The Problem Gives Rise to A Need

So: A character wants a certain state of being, a particular situation such as wealth, power, happiness, being in a relationship, owning a desired object. The character may believe this will be attained upon achieving a particular goal, the apparent manifestation of the solution to the external problem. However, once the character has reached the goal, it may transpire that the goal is not at all what the character needs in order to achieve the want. The full extent of the real need was perhaps suppressed by the character up to now, because it requires a change in character, which is to say a change of the negative character trait to a positive one.

That all sounds moralistic, which is a writer trap.

We all know stories in which characters learn something and become better people by overcoming negative character traits. Very direct examples are the ones where a young protagonist helps a grumpy old person to redeem him or herself, such as True Grit or Scent Of A Woman. The idea of a main character having to learn something is so fundamental that its effects are visible in virtually all stories, especially – but not only – in ones from Hollywood.

And as for the backstory trap, this one is a doozy.

These days, for the last hundred years or so, we have a tendency to look for the origin of negative character traits in our own histories, often in the form of more or less powerful traumas suffered in our childhoods. Sigmund Freud has influenced storytelling here. Many modern stories provide explanations of the internal problem of a character by presenting a traumatic event which occurred in that character’s past. The film director Sidney Lumet mocks the “rubber-ducky” explanation scene: “Someone once took his rubber ducky away from him, and that’s why he’s a deranged killer.” A topos that has become a particular cliché in modern storytelling is child abuse. The protagonist was molested as a child; that explains the anti-social behaviour; confronting the trauma leads to its healing. Such simplistic explanations are writer traps.

It is quite possible to use a specific event in a character’s past as the cause of the internal problem without it turning into cliché. Speaking from a purely dramaturgical perspective, in terms of story structure there are alternatives to trauma. The ancient classics did not use traumatic events to provide an internal problem for a character to solve. Most older stories don’t try to find such psychological explanations – they are often less about trauma and more about errors of judgment. About mistakes.

So, the event that led to the internal problem does not have to bear Freud’s influence. The event could be a simple mistake a character made once upon a time, which comes back much, much later to haunt that character. An example from the ancient classics would be Sophocles’ Oedipus Rex.

To create your own new story outline, click this button: