Theme is expressed, essentially, through the audience’s reaction to how the characters grow. A consciously chosen theme seeks to convey a proposition that has the potential to be universally valid. Usually – and this is interesting in its evolutionary ramifications – the theme conveys a sense of the way a group or society can live together successfully. In most stories, the theme expresses the positive effects of the cooperative principle of living in groups. A simple example might be “racism is bad”.

Consider theme as subtext – and sometimes this emerges without the author’s conscious effort – and it becomes an expression of an attitude or set of beliefs. Theme is powerful, in that it expresses values. So it is through theme that the power of storytelling can be exploited. When people are repeatedly subjected to stories that are designed to, for example, show outsiders to a group as a threat (for instance, the aliens in War of the Worlds and Independence Day), then eventually people may feel threatened by outsiders. (Sometimes this effect is called point of view, but at Beemgee we use that term differently). Another example: if the majority of stories a person consumes present violence as an acceptable solution to problems, then that person after a while potentially begins to feel that violence is part of his or her value set. Funnily enough, however, even in stories involving much violence, the underlying theme tends to suggest that such behaviour is only acceptable when it can be morally justified. So the subtext still expresses values suggesting how to live in a group.

Theme allows, indeed encourages variations. The various characters and the various subplots of a story may be different ways of looking at the same theme. So if the theme is reform, you may see the main character going through a personal reform, the institution he works for go through a reform, and his best friend failing to reform. All of these facets of a theme ideally invite the audience or reader to come to the same conclusion.

Viewing theme as dialectical argument leads to the idea that the first part of a story (in which setting, character and problem are established) posits one argument, to which the second part – which deals with the antagonism to that stance – is the counterargument. It is thesis vs. antithesis. The resolution in the third part is synthesis. The line of argumentation culminates in a statement, which is the story’s theme. So the course of the story explores aspects and interpretations of the theme and in the end comes to a conclusion.

It may be helpful to articulate theme as a question. To stick with our examples, themes might be expressed like this: “Is it necessary to reform in order to grow and develop?” or “Is it justifiable to treat some people differently because of the color of their skin?”. Other examples might be, “Is the solitude of death worse than the pain of life?” to describe the theme of Gabriel García Márquez’s One Hundred Years of Solitude. Or, “Are rich people necessarily happier than poor people?”, which might apply to F. Scott Fitzgerald’s The Great Gatsby.

In general, a theme establishes itself thus: The disturbance event early in the story that creates the external problem which triggers the course of events that leads to the moment of choice at the crisis, and the choice determines the resolution. The chaos brought into the ordinary world at the beginning of the story is restored to a new order. Story tames reality. It’s about learning and growth, not only in the characters, but in the audience or reader.

It can be helpful for an author to know the theme fairly early on in the creative process of turning an idea into a story. By keeping the overriding theme in mind, the author can determine the development of each character, each subplot, each scene according to the theme. Since the hard part about writing stories is making the millions of decisions along the way, keeping the theme in mind actually makes life easier for the author. Alternative ideas can be tested against the question: does this express anything new about the theme?

But attention! This is another potential writer trap. More later.

For the audience or reader, uncovering theme is part of the pleasure. Since we as humans seek meaning in everything, we want our stories to mean something. And finding the theme can be that satisfying moment of solving a riddle. Sometimes authors plant a clue to what they think the theme is into a line of dialog spoken by one of the minor characters, often in the first section of the narrative.

Nonetheless a story’s theme can be elusive. On the one hand, it is something the author may be intensely aware of during the process of writing, so it is part of the author’s intention. On the other, theme may be superimposed onto the story by its recipients, the audience or readers. Everybody can interpret a story as they wish, and may therefore see themes that the author never even considered.

So do authors start with the theme?

Not necessarily. In fact, it is quite possible to write a story without spending a thought on theme. Probably not that many authors sit down at their desks, fiddle with their pencils before deciding, “I am going to write a story about reform/racism/competitiveness/love/bullying/whatever”.

Mostly, the genesis of a story is an idea for something a little less abstract, such as an event or a character. Something about this idea may strike the author as worthy of deliberation, and only when the idea takes shape and begins to form into a potential story might the author begin to start looking for the theme that the idea is suggesting. Indeed, some authors may finish a satisfying story and only then begin to interpret a theme into what they have produced – much as the recipient does.

We would contend, however, that most authors are very conscious of what they are writing and how they write it. As such, determining the theme not too far into the process of developing a story is simply a useful way of working. 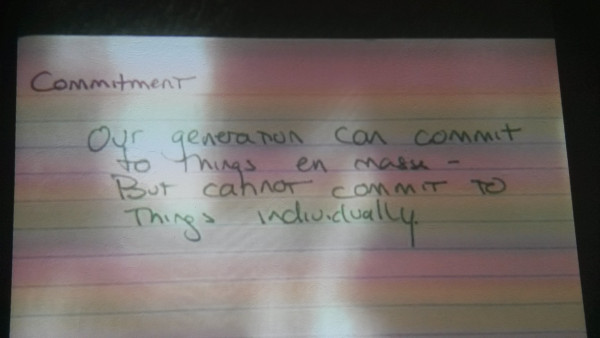 Here we see an index card written by Lawrence Kasdan and Barbara Benedek during the preparation period before writing the screenplay of the cult movie The Big Chill (Columbia Tristar).

Many artists and authors are preoccupied with certain themes, which can be seen to recur throughout their oeuvre. Compare for example such disparate films as George Lucas’ Star Wars trilogy and his earlier work American Graffiti, which depicted one single night for a bunch of small-town high-school kids. Though apparently very different from the spectacular space opera, American Graffiti is about some of the same themes: the value of education, escaping into the unknown, selflessness versus selfishness, and “you can’t stay 17 forever”.

And what about those writer traps?

First, the danger of overstating. An author may present a theme too prescriptively for the audience or reader to feel for themselves the truth of the proposition. Being too explicit about “the moral of the story” leads to scenes that scream “author’s message!” – which kills the emotional impact of the story. Ideally, the audience will not recognise the theme while “in” the story, only afterwards when they consider what emotional impact the story had on them, i.e. what they have learnt. As we said above, the readers/viewers want to work it out for themselves.

Second, composing the story according to a theme, making sure every little detail corresponds to the chosen proposition, bears the risk of pre-interpretation. Once the audience or reader has figured out what the theme is, if everything that follows simply substantiates it there are no surprises anymore. This is, of course, lethal to enjoyment of the story. The audience needs to be surprised, again and again. Which means not fulfilling all the expectations a theme may entail.

By the way, it may be of benefit to keep the notion of theme separate from the concept of premise, which we will define as a specific way of creating and describing story ideas.

Photo by Oleg Laptev on Unsplash.
The Big Chill card photographed from the extras of the 15 year anniversary edition DVD (Columbia Tristar).

Is there a story inside you trying to come out?