And let’s not forget that we learn far more from experience than from articulated rational presentations of academic or statistical knowledge. So sharing the protagonist’s feelings creates sustainable, long-term meaning. Out of the emotional comes the rational, not the other way round.

Hence the protagonist may not be excessively quirky or idiosyncratic, because that might prevent some of the recipients from identifying with the protagonist’s struggle.

In other words, in order to give all the readers or audience members the chance to identify with the protagonist, the protagonist needs to be the character with the broadest possible scope for projection.

This technique is particularly visible in stories popular with younger audiences. Think of Harry Potter, Luke Skywalker, Frodo Baggins. They are the ones at the centre of their respective works. But be honest, aren’t Snape, Han Solo, or Gollum more interesting as characters?

In Harry Potter, Star Wars, or The Lord Of The Rings, the hero is a screen, a relatively blank space onto which the reader or audience can project their own personality.

In stories for older people the same holds true, even if it isn’t as obvious. Just as an example, the range of characters in Orange Is The New Black is diverse and engaging. But the lead character, Piper Chapman, is the one whose lifestyle most resembles the demographic the show is aiming at, or at least is the most recognisable and familiar for a greater part of the target audience.

The Most Important Aspects of the Protagonist

It is often said that the audience or reader must understand the protagonist’s motivation. But this isn’t necessarily true either.

It is not always important to know why a character is doing something in order to be fascinated. Why does Iago want to destroy Othello? We’ll never really know. What the audience or reader must understand, however, are the protagonist’s:

The flaw may be a negative character trait, such as a shortcoming, deficiency or lack. Classically, the shortcoming may be an excess of a negative quality, such as pride. Generally speaking, the flaw is typically one of egoism. It may, especially in serial formats, simply be a deficiency in or lack of knowledge or awareness of a particular truth. But a flaw must be there, because without it, the character would have nothing to learn.

The want provides the driving force of the surface structure of the story, its outer or external side.

The goal is what is set up as the supposed way to achieving the want.

The task is the what the protagonist has to do, the mission, i.e. the means of reaching the goal.

A good way of helping the audience or readers to understand all these factors is a strong antagonism. This force in the story may be personified in a “baddy”. In many emotionally effective stories, this character is often a polar opposite to the protagonist – on all levels, right down to the way they look. Luke Skywalker is small and white, Darth Vader is big and black.

All of that means that often a protagonist is either still very young, with obviously much to learn, or slightly damaged, perhaps even potentially unlikable. But even with unlikable protagonists, there must be some redeeming quality, something that makes you doubt the character is really bad. Indeed, audiences/readers tend to search for, hope for, expect the protagonist to do the right thing in the end.

What makes the protagonist the most important figure is really not so much the screen or page time, but usually that she or he is the one who has greatest internal problem or conflict, who has the most significant emotional transformation. That means the protagonist tends to be the one who grows most, and whose story journey or character arc is therefore the longest.

Coming of age stories are obvious learning curves, and at their hearts that is what the above mentioned examples (Harry Potter, Star Wars, Lord Of The Rings – all of them essentially fairy tales) are. They also involve a sense of leaving behind, of loss. It is a universal experience, shared by all of the audience, by all readers.

So there is room to identify with and learn from the protagonist. But in order to get the audience/readers interested, a reason to be interested must be presented. Usually this is accomplished by instilling a sense of pity. Harry lives with unpleasant foster parents under the stairs, Luke’s foster parents are nice, but they get killed. We identify with Frodo through his relationship to Bilbo, and then through the threat to his entire home, as presented by Gandalf.

This sense of Aristotelian pity is what gains the protagonist our sympathy. We feel they deserve better. We may experience some degree of moral outrage at their plight.

What gets us really hooked is their volition. Protagonists tend to be driven by something quite essential. Harry yearns to find out about his real parents, especially his mother. So does Luke, and he wants to get away from the farm, wants adventure. Frodo’s drive is triggered when Bilbo, whom he loves, disappears.

So the protagonist is active. The protagonist’s drive does not usually come to him or her from the outside, but is often a quality within him or herself, that may need to be found or uncovered first.

Once they get going, protagonists get threatened. That makes the protagonist – and us – feel fear. Often the stakes rise and grow higher and higher.

And in the end – catharsis.

For some exercises on characterisation and more, have a look at the article by our friends at self-publishingschool, How to Write Great Characters.

Now compose your story. Click to open our free web-tool: 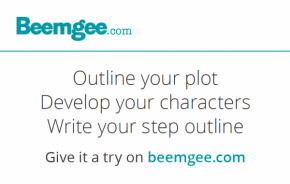